Jack In The Box

The Dragon, His Sidekick, A Nemesis, & Their Cows: The Final Indispensable Components in the Last Jack of Fables Story of All Time!

In Fables, Wicked John was originally thought to be a darker copy of Jack, Wicked John turned out to be the original from which Jack was minted.[2]

*Based on the fact that Jack Horner is his doppelgänger and not the original copy, it serves to reason that Jack's supposed backstory is actually John's.

John is the bastard child of Prince Charming, who knew nothing of his existence and Prose Page. Due to the fact that among Literals mating with Fablekind is considered taboo and the offspring of such a union would be considered an abomination, Prose gave birth in hiding. After his birth, his mother left him as an infant in the care of a poor but upstanding farmer and his wife, who lived in the dead center of the middle of nowhere. For a time, his mother's plan succeeded, and the boy grew up in relative obscurity.

One day, a twelve year-old[3] John was sent to market to sell the family cow, lest he and his mother starve through the coming winter. On the road to market, John met a traveling man who traded him five reputedly magic beans for the cow. His mother was striking wroth at the news. His mother threw the beans out of their cottage window and ordered the young John to bed without his supper. Later, when his mother was fast asleep, John scrambled about in the dark searching for his magic beans. He recovered four out of five. When the next day dawned, John discovered that the missing fifth bean had grown into a giant beanstalk. Of course, being a simple peasant boy of low education, he set out immediately to climb it. Young John found a land of giants up in the magical Cloud Kingdoms and set off to explore, or more specifically to loot treasure. Eventually, John found the giant's treasure room, and in it were many fabulous magical things like a goose that lays golden eggs.

Over the following days, John made two more excursions up the magic beanstalk to loot the giant's treasure hoard, before the giant caught onto him. The giant followed John down the beanstalk, descending close behind him. Alone, without the aid of his fellow townsfolk, John succeeded in choping through the beanstalk in time to send the hapless giant plummeting to his untimely demise. The surviving townsfolk herald young Jack as a great giant killer and celebrated him as a hero of renown - completely overlooking the fact that, except for John's misadventures in the first place, they never would have been in danger from the giant. His reputation as a giant killer spread far and wide over the following years. During these giant killing years John was killed and, due to his many deficiencies of character, John was sent straight to Hell. During John's first documented death, Kevin Thorn, attempted to rewrite John back to life; however, unable to remember John's name, Kevin unwittingly created a copy of John, an entirely separate individual named Jack. It took some time, but John eventually managed to talk himself free of Hell - and earned the sobriquet Wicked John in the doing of it.

A man who is the spitting image of Jack Horner, except from the dark hair. He used to be best friends with Raven and is shown several times trying to get Alice's attentions, though she's clearly disgusted by him. It is revealed that Jack Horner was never involved in the Beanstalk or Giant-killing incidents, but is actually an unknowing copy of Wicked John. Upon Wicked John's death, some great power decided to write him back into the stories, but got his name wrong, thus creating Jack Horner. John was later revived, and now both Fables exist.

Gary the Pathetic Fallacy informs Jack of the facts after a mysterious, old man shows up and plunges the sword Excalibur through Jack's chest (and dies shortly thereafter). Jack, who can’t get the sword out, is delighted with the news, since this means that the sword was really meant for John, the “real” version. Jack is able to pull Excalibur out of his chest and impales John with it, before leaving John behind.

In the final story arc of the series, it is shown that John has been at the Grand Canyon, the place where he was left behind, for at least two decades, still living with the sword stuck in his chest. He is now being used as a tourist attraction as the "Impaled Wild Man". It appears no one's really tried making real interaction with him, beyond trying to pull out his sword for fun. Due to this treatment, he has lost some of his mental stability and has become somewhat delusional. Eventually, he has enough of being an attraction and makes a long journey to find Gary the Pathetic Fallacy. He does eventually find Jack, who has been transformed into a dragon, and Gary. At the same time, Jack Frost Two arrives to slay the dragon Jack, not knowing that the dragon is his father. Gary, rushing to Jack's defense, pulls the sword right out of John in order to defend Jack, and Wicked John dies from the injuries.

John seems to parallel Jack in terms of personality; both are charming rouges with a tendency to lie and steal. Due to his very limited appearance, not much else is known about his personality. After years of being trapped in the Grand Canyon, John's mental stability seemed to deteriorate and he became somewhat delusional.

John is the spitting image of Jack Horner, except with dark hair.

Jack of Fables: The Deluxe Edition 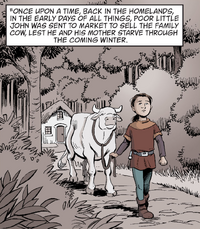 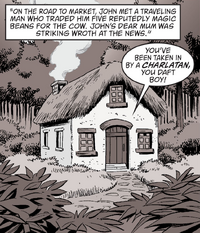 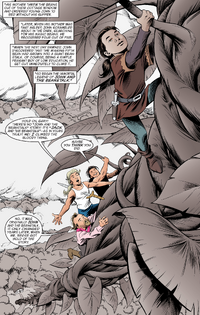 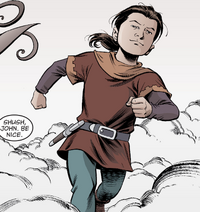 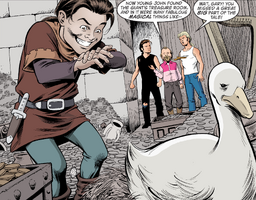 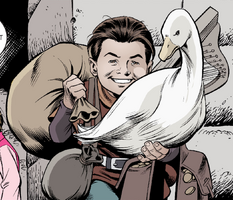 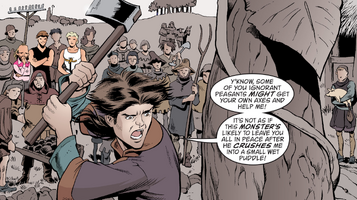 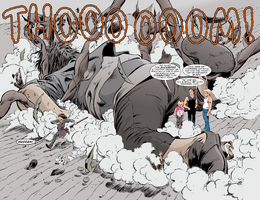 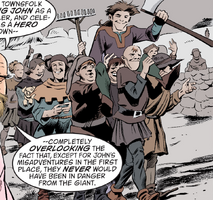 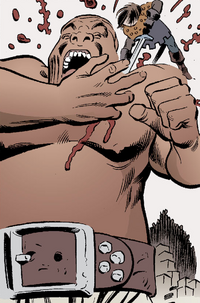 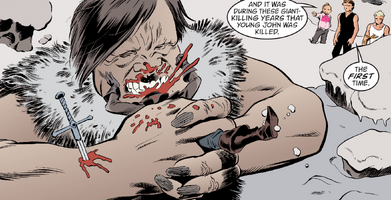 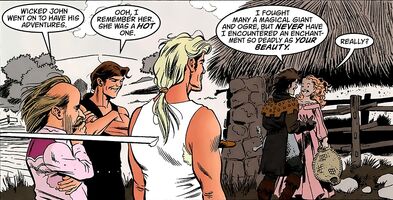 Retrieved from "https://fables.fandom.com/wiki/Wicked_John?oldid=29105"
Community content is available under CC-BY-SA unless otherwise noted.