The Queen of the Silver Realm

Snow White and the Seven Dwarfs

The Queen, whose name has yet to be revealed, was ruler of the Silver Realm, and Snow White's and Rose Red's paternal aunt. After her husband's death, she became the sole ruler of his kingdom and "adopted" Snow White when she was still a child. Jealous of her niece's beauty, she tried to assassinate Snow White twice, ultimately failing both times.

Very little is known about the Queen before her accession to the throne, aside from the fact that in the past Lauda helped her to achieve the position of queen in the Silver Realm.[1] It was also revealed by the Cricket on the Hearth, that she killed her brother sometime after becoming queen; whether or not Lauda knew of her involvement or what her motivations for doing this were is unknown.[2]

At some point she acquired a magic looking glass that spoke only the absolute truth.

At some point, the Queen's husband died from causes unknown. Sometime after this, Lauda, fearing for her daughter's safety, arranged for Snow to live with the Queen. While the Queen was reluctant to shelter her niece, she was convinced to do so by Lauda, who reminded her sister-in-law that it was she who helped her to achieve her high status. In exchange, the Queen conditioned all debts paid.

Everyday the Queen would consult her magic looking-glass, asking it:

Mirror, mirror on the wall,
who in this land is fairest of all?

And always the looking-glass replied that she was, until one fateful day when it said different:

You are fair, that is true,
but Snow White is now
even lovelier than you.

And it was true, for Snow White had grown in both years and beauty. The Queen was enraged at this usurpation. The Queen called for her huntsman to drag Snow White away, into the deep, dark forest where many terrible deeds can be concealed. As proof of her niece's demise or as a prize of sorts, she ordered her huntsman to return with Snow White's heart in a box. Snow White pled for her life, and in time the huntsman's heart was moved. Sparing Snow White, the huntsman substituted the heart of a pig to present to the Queen and she was none the wiser.

In time, the Queen learned the truth about her adopted daughter's survival. Cloaking herself in the guise of an old woman, she visited the seven dwarfs' cottage and gave her niece a poisoned apple. Snow ate the poisoned apple and fell into a deep coma. Her captors on finding her so assumed the worst and dumped her body onto the edge of the forest, and had she been left there she would surely have died, food for scavengers. But Prince Charming found her first and his love was enough to overcome the wicked Queen's poison since all nobles of his lands had some degree of magic in them.

What happened to the Evil Queen following this has not yet been revealed.

The Queen is depicted as a vain and proud individual.[1] She was also a malevolent ruler and sinister enough to have no qualms about killing her brother or niece. The huntsman was also so fearful of the Queen, he fully intended to execute the innocent Snow White.

The Queen was a lovely, pale-skinned woman. She wears very regal, albeit menacing, attair. She also wore what seems to be a black balaclava that covers her ears, neck, and hair and only leaves her face exposed. In her disguise, the Queen dons a blue, hooded robe with enormous hanging sleeves and blue slippers. Her physical appearance changes from that of a youthful queen to that of a decrepit, old peddler woman with long, tangled white hair. 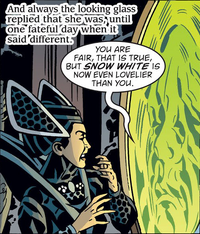 The Queen's reaction to Snow White being fairer than she.

Retrieved from "https://fables.fandom.com/wiki/The_Queen_of_the_Silver_Realm?oldid=29132"
Community content is available under CC-BY-SA unless otherwise noted.