The Literals – an extended family of characters who literally embody literary notions. It's also very possible that one of The Literals may have created all of the Fables plus the universe in which they reside, unbeknownst to our beloved Fables.

The full story on this enigmatic crew of characters begins here, the first in a 3-issue miniseries and Part 3 of "The Great Fables Crossover," an epic, 9-part tale spanning the pages of FABLES and JACK OF FABLES.

The story kicks off when Jack reveals the existence of The Literals to Fabletown, and things quickly get chaotic from there. Fables don't like the idea of having a living god who can wipe them out with the stroke of a pen, and have thus decided to get rid of The Literals. Will they succeed in erasing their creator from existence, or will he literally rub them out first? 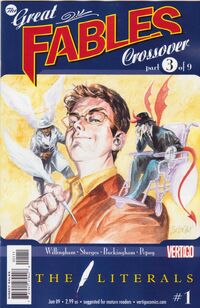 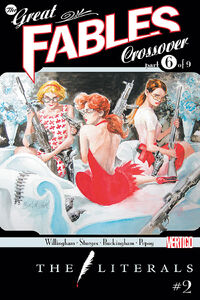 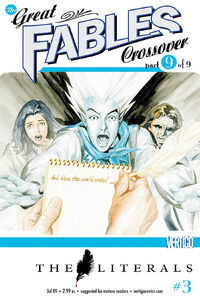 The Literals #3 (August 2009)
Community content is available under CC-BY-SA unless otherwise noted.
Advertisement