Some Ideas Toward the Prospect of a Final Solution for Fabletown: Part One of Sons of the Empire; Hair

In Fables Rapunzel's hair continually grows - not a feature of the original fable - forcing her to have it cut three times a day. The witch who cursed her with ever-growing hair was Frau Totenkinder.[1]

According to Rapunzel, in order to get through the winter, her birth mother sold her, for a handful of gold and Rapunzel leaves, to be a witch's apprentice. Frau Totenkinder cursed Rapunzel's hair to grow at an accelerated rate and kept her locked in a tower. When Rapunzel was a teenager, Cinderella's Fairy Godmother showed a prince the way to the tower she was kept in, mainly to spite Frau Totenkinder.[2] Rapunzel and the Prince had a passionate love affair which resulted in Rapunzel's pregnancy. When Totenkinder found out, she disowned Rapunzel.

After being thrown out by Totenkinder, Rapunzel tried to find her lost lover. Unbeknownst to her, Cinderella's fairy godmother forbade the prince to contact Rapunzel again, as the godmother had "plans for her". No one would take the homeless Rapunzel in, because of her past as Totenkinder's ward. Left alone, Rapunzel was forced to deliver her babies on her own and would have died if an unknown woman had not assisted with the birth. During the labor process, the woman gave Rapunzel a drugged apple and stole Rapunzel's twin daughters away after telling Rapunzel her children had died. Assuming it was Frau Totenkinder who kidnapped her children, Rapunzel tried to confront her adoptive mother when she regained her strength. But the tower was gone, along with Frau Totenkinder. Rapunzel spent centuries looking for her daughters across a hundred worlds. She went to great lengths to find them, soon becoming a warrior and even killing a minotaur, but never managed to locate her children.

Eventually, she gave up trying to find the children, and sailed off the edge of the world in a ship, planning to die. Instead, she washed up on the shore of the Hidden Kingdom; a Fable Homeland populated by people and creatures of Japanese mythology and culture. There, she became a member of the Emperor's court, and had a romance with a female kitsune named Tomoko.

It is also revealed that Rapunzel is Okiku from the famous Japanese ghost story; while spending time at the Emperor's court, she took Okiku as her new name. The shogun had Rapunzel's lover banished, along with many other yokai. He confiscated the kitsune's foxfire - her soul, which she kept outside her body. The shogun kept the foxfire in a safe locked with a sliding puzzle. When Rapunzel tried to get the foxfire back for Tomoko, she discovered that she was unable to solve the puzzle slide, and broke a plate in anger. The shogun caught her trying to break her into the safe, beat her up and threw her limp form down a well. Rapunzel was unable to climb out the well, and ate her own hair in order to survive. She coughed up hundreds of bezoars, knots of her own hair forming in her gut. They talked to her with spiny mouths. Rapunzel knotted several of them into her hair, which gave her the purchase she needed to climb out. She escaped from the well, and killed the shogun and his men. Unfortunately, Rapunzel's disappearance and the lies told by the cursed ghost of Mayumi, led Tomoko to believe Rapunzel had betrayed her.

Escape from the Homelands

Before she made it to the mundy world, Rapunzel was apparently part of the group of Fables who were part of the last stand in the old territory and she was also present at the Remembrance Day for those who died in the battle at the Last Castle. Due to her fast-growing hair, Rapunzel is forced to live under strict conditions while in Fabletown to prevent any mundies from noticing the fast growth. Joel of the Crow Brothers gives her three haircuts each day. The hair is donated to make wigs, using the guise of her hair coming from many girls.

Centuries later, in the mundy world, Rapunzel and Joel Crow venture with Jack Horner (before his break with Rose Red) to Japan, where the Japanese Fables have started a new life after the Adversary's invasion. Rapunzel gets caught in a war between Tomoko's group and the other Japanese Fables, but eventually manages to help her former lover and the other Japanese Fables find their way back to their homeland via a magical portal. Frau Totenkinder reveals to Joel Crow that she knows who took Rapunzel's children, and that this person is an enemy of Totenkinder, who would use Rapunzel to bring her and all of Fabletown down. This is why the twins were stolen, and why she can't tell Rapunzel. She persuades Joel to give Rapunzel a memory potion that will make her forget about her daughters, Tomoko and The Hidden Kingdom. Thus why she appears to have no ill will and possibly her friendship with Joel may have been affected as they are not seen interacting as much.

To date, the series ended with her not having her memory back or ever finding her twins and their status remained unknown.

Rapunzel is a driven person, who still hopes to find her daughters one day. She's friendly, although she tends to stick to herself, her closest friend being Joel.

Rapunzel is a beautiful young woman with blonde hair. 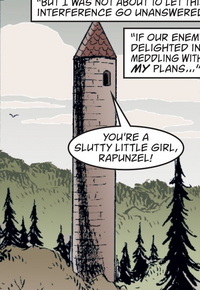 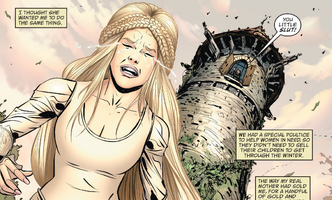