Mersey Dotes is a mermaid living on The Farm. She has an adventurous spirit, so she's saddened to have to spend all her time in a small lake.

Mersey Dotes was originally a human girl who loved to explore new lands. One day, she found that she had run out of lands to explore. A fisherman suggested that his wife may be able to solve her problem. The fishwife was able to turn her into a mermaid and Mersey was able to explore the ocean's floor.[1]

She was in an underwater city when the Adversary managed to attack even there. Mersey manages to escape to the Sanctuary world. Once The Farm was established, Mersey was forced to live on the small pond there.[1]

Mersey Dotes name comes from the novelty song "Mairzy Doats". The song doesn't actually have anything to do with the character. 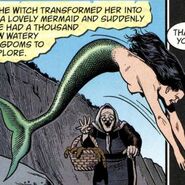 Add a photo to this gallery

Retrieved from "https://fables.fandom.com/wiki/Mersey_Dotes?oldid=29261"
Community content is available under CC-BY-SA unless otherwise noted.