Jack Frost, Part One of Two

The Dragon, His Sidekick, A Nemesis, & Their Cows: The Final Indispensable Components in the Last Jack of Fables Story of All Time!

In Fables the original Jack Frost was Jack Horner. He romanced the Snow Queen, whose son by Jack is Evelyn Lawrence Pinder Shinks Cobblepewter. After the Snow Queen is put to sleep by Briar Rose, Evelyn assumes her powers over cold and snow and becomes the new Jack Frost. Angry at his father for leaving, Frost goes to visit the farm. Once there, his father quickly gives him life lessons before trying to leave. Frost, angry at the disregard for his mother shown by Jack, freezes him. Jack is later thawed, and he sends Frost on a quest to help Bigby and Jack's sisters defeat Kevin Thorne.

Evelyn-Lawrence-Pinder-Shinks-Cobblepewter is the son of Jack Horner and the Snow Queen. Prior to his birth, his naive and gullible mother (who assumed her pregnency was an illness) lent her wintery powers to his father, a gift he abused and wrecked chaos with. After their son was born and being unfaithful to Lumi in every sense, Jack was tricked by Lumi's sisters into relinquishing her powers back to her. As a result of Jack's predictable betrayal, Lumi hardened her heart, becoming as cold as the season she commanded, lavishing the young Jack with all her bottled and repressed love.

When his world was invaded, Lumi offered up her services to the Empire in exchange for her world being spared. Owing to Lumi's duties as an adviser for the ominous Adversary, young Evelyn lived a sheltered life along with his majordomo Vrumpus, growing into a sickly, frail child.

When at the climax of the war between Fabletown and the Empire, Lumi immediately falls permanently asleep because of Briar Rose's curse. Her wintry powers seek Jack, turning him into the second Jack Frost (essentially a male version of the Snow Queen), imbuing him with several powers, such as the absolute mastery over cold and snow, the ability to travel between dimensions and the mystical ability to track Jack Horner. As his powers manifested, he confronted Vrumpus about his mother and his father's heritage and decided to no longer go by his old name and changed it to Jack.[1]

Jack decided to embark on a journey to find his father, sending letters of sort to Vrumpus. During his journey he came upon Wicked John and momentarily believed he was his father, but was mistaken by John's crude behavior. Jack eventually finds his father at the Farm, during which Jack was taking opportunity to manipulate Stinky and his Boy Blue cult. However, Jack either denied the boy's claims of being his father or simply didn't pay attention half the time. Young Jack was disgusted by his father's bad behavior and blamed him for being the cause of his mother's cold demeanor. Due to how he remained unfaithful to her and even tried hitting on one of her sisters. Jack still showed no respect or remorse, loosing his temper he froze his father alive and was then attack by Stinky and the Farm animals. Beauty, Beast, and Cole were eventually able to calm down the commotion going on. But Jack was slipped away with Rose Red to Snow and Bigby's home to get away from the over religious zealots.

But Jack would find his father again. His father annoyed by his son's childish insistence, tricks him into believing that he must first complete a great quest before he has the right to ask his father any questions. With this objective in mind, Jack Frost takes part in the battle between Fables and Literals, ultimately turning the tide in favor of the Fables by freezing Kevin Thorn before he can write an end for the current universe. Snow and Bigby are very proud of young Jack's first heroic deed. Snow even gives him a peck on the cheek as a reward. Bigby was just surprised to see a good kid even related to Jack Horner. When the Literals leave the main universe to write a new one, Jack Frost stays back with his aunts, the Page Sisters, forswearing his bumbling father and unsure of his future.

On Hillary and Priscilla's advice, Jack Frost divests himself of Lumi's powers. However, to his great surprise, instead or returning the meek, sickly kid he was, he turns into a quite handsome young man with the stamina and physical prowess of his father and the innate ability to hop between dimensions. Joining forces with Gepetto's wooden owl, briefly tasked by the Adversary in spying the Homelands, whom he names "MacDuff", he starts a career as a hero for hire, with McDuff acting as the brains of the operation, and the good-natured, courageous, but trusty and still naïve Jack acting as the brawn. Throughout the story, Jack Frost strives through many deeds, no matter how small or insignificant (such as finding a lost goat). Jack would eventually get his first real assignment helping Elsa Fen go to her father's aid.

However, when they get to her father's castle, its empty. No sooner do they get there are they kidnapped by the nigthwalker creatures. Its revealed they had been kidnapping the humans to find Jack himself. They needed him to help stop a sorcerer who had been controlling them. He agreed on the condition that MacDuff would make a peace treaty that would stop the constant fighting between his people and the humans. After a journey with Brak, and a long enduring battle, he defeated the sorcerer, and peace was put in effect. Jack would get quite a surprise when Elsa came to him and gave him a kiss, his first kiss. Her family began rejoicing around the two. But Jack was fairly lost.

Its then MacDuff explains that when you "save" the girl, you get the girl; meaning he was now engaged to Elsa. Though Elsa was a good person, Jack didn't feel ready to marry. So he and MacDuff quietly crept out at night. Jack would eventually find himself in the kingdom of Landfall. There he heard rumors of Empyrean was a tyrannical beast who was demanding gold as tribute and virgin maidens for his own pleasure. He went to a witch Deirdre for assistance. Though he developed quite a crush on her, MacDuff didn't trust her due to her being a witch and the belief witches like her always had other motives. After an encounter with Landfall's princess, Jack gave into his attraction with Deirdre and became her lover. But MacDuff would be proven right as Empyrean had no idea of Jack's accusations. Deirdre was revealed to be his old lover and had manipulated Jack to come and kill him. Though he had no intention to be in the middle of her personal vendetta, Jack beheaded Empyrean to protect Deirdre.

But he told her clearly he wanted nothing more to do with her and never spoke to her again. After leaving her, he exposed the king for his lies. It was discovered he used Empyrean's name to hide his secret plan of stealing gold and sold the maidens into slavery. He sneakingly tried to weasel Jack into his ploy, but he turned the king into the authorities. His daughter offered to marry him, seeing her kingdom needed a loyal king like him. But Jack kindly refused as he was happy being himself, a hero. After he left, he had MacDuff repaired and over the years he was given a few modern upgrades from his old body.

In the Jack of Fables: The End, Jack spent many good years of his life fighting, battling and doing many heroic deeds. He had finally become a hero and was getting ready to retire. Before he could, he was told of a dangerous dragon in the mundy world. But Jack, didn't know it had been his own father, most likely turned into a dragon by his own greed. He also didn't know that over the years of isolation he and Gary had also lost somewhat of their sanity. Jack came in the midst of the chaotic battle between his aunts the Page Sisters, Raven and the other Fables (who believed the cave to be Fabletown), and his father and Gary. Either his aunts didn't see or recognize him in the chaos or they didn't care. Once Jack had burned all the books (the possible source that could have given them their immortality), they began shooting. During this fight, due to the insane Gary's urging, Jack fought his son.

Young Jack lost his right arm but MacDuff helped heal his arm as best as he could. In the battle Hillary had been shot by Tin Man, Priscilla by Humpty Dumpty, and Robin and been eaten by the Cowardly Lion. In the chaos of the fight, young Jack lost his friend MacDuff. And young Jack killed the insane Gary in self-defense. The battle finally ended between father and son, Jack the dragon was stabbed by Jack Frost. But Jack Frost was beheaded by his father's claw. Its unknown what became of Elsa Fen and Brak as they had come in on the battle.

Jack Frost II was originally very naïve and almost the complete opposite compared to his rogue father. During his time as a professional hero, Jack became a daring and courageous man dedicated to helping those in need.

Originally a sickly and thin boy, Jack was given a muscular and "icy" physique when he came into possession of his mother's powers. After relinquishing her power, he retained his muscular physique and handsome features. His hair also turned white permanently. 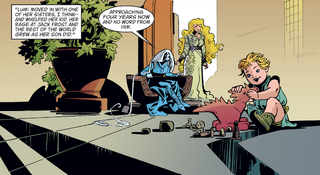 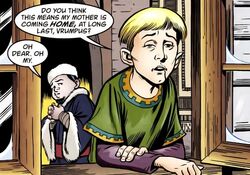 Prior to becoming Jack Frost II 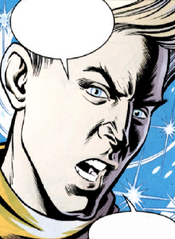 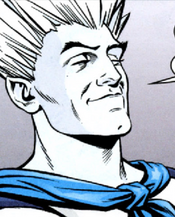 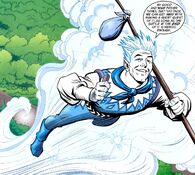 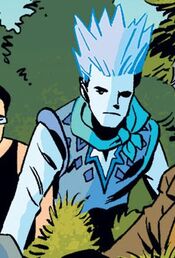 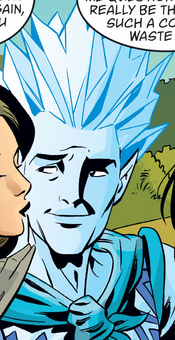 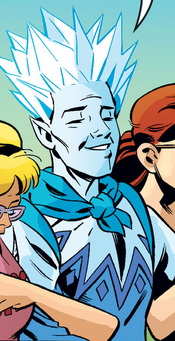 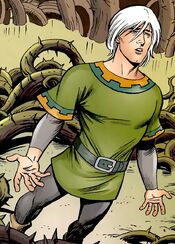 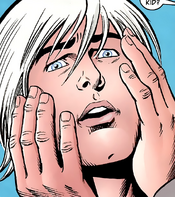