Hansel and Gretel, Rapunzel, Beauty and the Beast

Frau Totenkinder, also known as The Black Forest Witch, but whose first name was Bellflower, is a powerful member of the 13th Floor in Fabletown. She is an old rival of Baba Yaga and the Fairy Godmother, as well as the Adversary.

Frau Totenkinder was born into the Fog Mountain tribe, seven years after the ice had retreated from their current home, and grew into a beautiful young woman, apparently during the Paleolithic era.[2] Once she reached puberty around the age of fourteen, she began to experience premonitions, initially weak, but growing in strength and accuracy, until the tribe made her their shaman. She became romantically involved with Aurac, the son of the tribe's chief who expected to marry her, until another nearby tribe invaded their lands. To avert war, the chief's son was married to the daughter of the other chief, leaving the newly pregnant Totenkinder alone. If it had become known that the two had slept together, both would have been cast out, so Aurac denounced her, accusing her of consorting with demons, which led to her lone banishment from the tribe.

Realizing that she would need far greater power than she currently possessed in order to survive, Totenkinder ritually sacrificed her newborn son and was granted considerable power, which she partly used to take revenge on Aurac. She learned that, while sacrificing one child a year would keep her power, sacrificing two would prevent her from aging. Years passed as she heaped every indignity imaginable on the tribe that cast her out; ages passed and she remained unchanged, growing only in power and cunning. One of her earliest exploits having been her blessing a Roman City with seven years of plentiful harvest and then seven years of famine. Frau Totenkinder also blessed "Lance of the Lake" so that as long as his heart was true and he live a life free of sin, he would win every battle and every duel.

Becoming a powerful witch, she assisted those who were kind to her, and punished those who were less than kind. She helped a village who earned her favor by creating the three Billy Goats Gruff to eliminate a bridge troll that was causing problems for the village. Later, she took her revenge on the village of Hamelin by giving Max Piper an enchanted flute, instructing him to lure away every child of the town as they'd earned her ire. Prompted by her experience with Aurac, she always waged her own private war against handsome princes and men of wealth and privilege, during which she was responsible for the curses on Lord Beast and Prince Ambrose. In order to stem her own physical desires, she allowed herself to age considerably, practiced her craft, ruined the lives of those who displeased her, and blessed those who didn't. One such instance of the latter, Totenkinder reward a woman's good daughter, whom the mother despised, with every manner of riches and blessings, but this woman's beloved evil, vain, daughters she baked into a pie and shared it with their mother for lunch, revealing her punishment to this woman as she ate the pie.

At some point, Totenkinder purchased a girl named Rapunzel in exchange for a handful of gold. Making the girl her apprentice, Totenkinder shut Rapunzel away in a tower and, for unknown reasons, cursed Rapunzel's hair to rapidly grow. Eventually, Rapunzel begun a passionate love affair with a prince and this resulted in Rapunzel becoming pregnant. When Totenkinder found out, she threw her young ward out. Soon after disowning her adopted daughter, Totenkinder grew tired of social congress with men and other sorts of people, and withdrew to a cottage deep in the remote woods. Once or twice a year, when she sensed their proximity, she'd dress up her home in an extravagance of sweet cakes and candies to lure the rare passing child to be sacrificed; sometimes more than a year would pass between such visits, and her power waned. After an extended period of time since her last child-sacrifice, she encountered Hansel and Gretel, who outsmarted her and burned her alive in her own oven.[3]

While she healed herself, Totenkinder revealed her life story to the two girls and while Rose grew to to respect her for her tale, Snow was now horrified of Totenkinder. While Snow wanted go leave Totenkinder before she grew strong enough to harm them, Rose convinced her otherwise and, telling her about the mundane world, Snow and Rose attempted to help her reach it, covering a considerable distance with her. However, they became separated while traveling and exactly how or when Totenkinder ultimately reached the mundane world is unknown.[4]

During the Invasion of the Wooden Soldiers she clashed in a duel with Baba Yaga, defeating and imprisoning her in the Business Office. She later became vital during the incident with the Arabian Fables, helping to recapture the unleashed D'jinn.

She continued to assist Fabletown with their needs until the moment Mister Dark attacked. Having decided that the duel with the creature would be her last service, she rejuvenated herself (taking the name of Bellflower and traveled to the Homelands to find a way to stop him. There she found Dunster Happ, the sorcerer who had imprisoned ("boxed") him the first time, and requested his help. Although he declined, Bellflower remained with him, the two having developed feelings for each other.

She returns to The Farm to announce her duel with Mister Dark to everyone there. Her duel takes place in New York city, during which she dispatches his witherlings and destroys all the teeth he has collected, preventing him from summoning them again. Bellflower manages to actually wound him and, with the help of Clara and the other Fables, she is able to trap Mister Dark inside a gold statue. But he manages to escape and mortally wound her, apparently killing her. She didn't die but transported herself back to the Farm where she reincorporated, but having spent all her magic during the duel, she is no longer a match for Mr. Dark. As she had already decided before the battle that it would be her last, she leaves with Dunster.

She is seen again in the Homeland of the North, having been recruited by the North Wind to help with his sacrifice in dealing with Dullahan. However, they become trapped there until Winter finds them and brings them back with her.

She is seen again as a victim of Goldilocks where she and Dunster are felled by her sword. By Cinderella's doing, she was returned to life at the cost of her lover's.

Not long after her resurrection, she returns to The Farm in order to aid Rose Red in stopping Bigby Wolf, who was feral while under the control of Nurse Spratt. Inspired by the knight in golden armor and witch template Beast and Ozma set up to fight Bigby, they confront him and draw their fight with him, as Totenkinder manages to position the fight so that Bigby will be killed by her if he kills Red Rose. She is eventually killed by Cinderella on Snow White's request, as Snow White feared her siding with Rose Red in their upcoming battle. Their fight involves heavy magic on both sides and causes a large explosion, largely ruining the new Fabletown castle. After the explosion, Cinderella manages to crawl over to a burnt Totenkinder, killing her by stabbing her in the forehead with the glass slipper, before dying herself.

Batman Vs. Bigby! A Wolf In Gotham

Apparently, Totenkinder's spirit was able to live on in some form, although she admitted that she hasn't been able to truly find her way back to the land of the living. Hoping to resurrect herself, Totenkinder traveled to another universe and took control of the Gotham villain Bookworm, stealing a book of spells[5] that held twelve of the most powerful spells known to Fablekind[6] in the hopes of finding one that could formally resurrect her. Ultimately though, Bigby was able to recruit his daughter Winter to drag himself, a resurrected Cinderella and Totenkinder back to their world.[1]

In her honor, an institution dedicated to the study of magic was named after her: the Totenkinder Memorial School of Magic.

Her personality can be a mystery, and she is known by most Fables as an old crone. She often deals with the other Fables, casting spells or providing enchanted items in return for favors. Frau Totenkinder is a schemer who holds her own secrets and plans; she knew the identity of the Adversary long before Boy Blue found out but kept it to herself in order to protect her source. She is manipulative, cunning, and sharp. Her manipulative nature has caused Beast to question her intentions, as her actions mirror that of the Adversary.

However, she has a strong loyalty towards Fabletown. She is fond of the community as they have made her feel welcome and accepted, more so than her original tribe. She has helped her community through every crisis. She considers herself in debt to Snow White and Rose Red, who saved her from the oven and took care of her when they could have fled the Adversary's forces more quickly by leaving her behind and, because of this, she is determined to make sure that they win against the Adversary.

Despite her previous cruel and harsh actions done to survive and later her various acts of cruelty and her seemingly lack of regret or pity for her victims, it was later hinted by Frau Totekinder that she does indeed harbor some regret and guilt over some of her actions. This is fully seen in her relationship with her adoptive daughter, Rapunzel, where she clearly stated that she regretted sacrificing her new born son for power and saw the girl as her second chance at motherhood. Centuries later despite not outwardly showing it, she still continued to harbor care and maternal love for her despite their strained relationship and has gone the extra mile to protect her from her various enemies.

Frau Totenkinder's natural form was as a beautiful young woman, but she normally appeared to be an old woman.

Frau Totenkinder was said to be one of the most, if not the most, powerful members of Fabletown; as stated by the North Wind himself, she was possibly on the verge of becoming one of the Great Powers - some sort of archetype of witches.[7] In the Homelands she was known for cooking and eating children, however her power is derived through ritual child sacrifice rather than blood drinking or other acts of cannibalism.[3]

Frau Totekinder was known to have been a avid collector and hoarder for various magical Items and tools during her time living in Fabletown and would occasionally lend these items out to its citizens for a price. 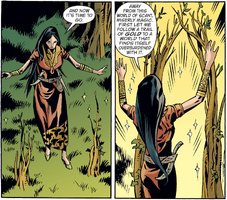 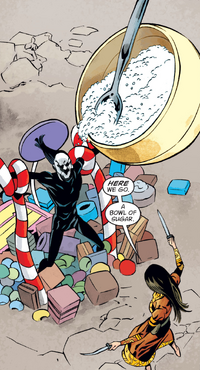 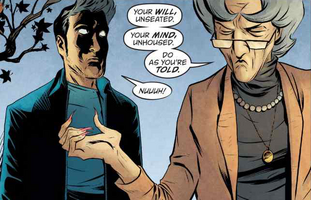 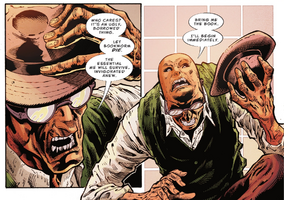 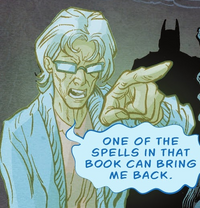