A King of Glass and Shadow

The Fairy Witch, also known as Mother Birdie, is the former leader of the 13th Floor Witches. She is now senile, and it is implied that Frau Totenkinder was responsible for the Fairy Witch's current mental state.

In the Homelands, the Great Fairy Witch lived a humble life in her cottage and would often help the people who came to her for magical assistance. One such person was the adoptive mother of Thumbelina, who desired a daughter even if she was tiny. The Fairy Witch complied and gave the woman the barely seed from which Thumbelina sprang from.

The Fairy Witch managed to escape from the Homelands during the Exodus.

Upon arriving in New Amsterdam, the Fairy Witch went under the name Mother Cherish and took charge of the growing coven of magic users, which would later become the 13th Floor, and helped with the creation of Fabletown, helping to weave the spells of non-detection and privacy. It was also Mother Cherish's idea to magically link large spaces like the Business Office and Bluebeard's castle to smaller ones through the use of door frames.

When Thumbelina arrived in Smalltown and many were arguing and fighting over her affections, Mother Cherish told Bigby Wolf that she had left the jar of barely seeds at her old cottage, resulting in an adventure to the Homelands to retrieve them.

Sometime in the 20th century, fellow witch and member of the 13th Floor Frau Totenkinder made a small comment about her retiring and a well earned rest. Soon, Mother Cherish lost her grip on reality and began to babble nonsense, sitting away from the other witches and warlocks and quietly knitting. She soon stepped down as the leader of the 13th Floor and Totenkinder took over, taking her knitting equipment as well.

Now the Fairy Witch is barely a shadow of her former self. Often called Mother Birdie by her fellows, she sits away from the other members of the 13th Floor and babbles nonsense as she quietly knits, with no needles or yarn. Mother Birdie and her colleagues use their magic to supply the glamours needed for the non-human-looking Fables but charge such a steep price that many can't afford to purchase them.

When Mister Dark took up the attack against Fabletown in the 21st century, Mother Birdie's mental failings were a detriment to her colleagues. Upon awakening, Dark unraveled all of the spells used to create Fabletown, magic stolen from his magical artifacts, and the Woodland Building began to come apart. The doorways that Mother Birdie had magically linked became undone and trapped Bufkin , Frankenstein's Head and the Magic Mirror in the Business Office, along with the newly-released Baba Yaga and the D'Jinn.

Mother Birdie continued to serve the 13th Floor even after Frau Totenkinder stepped down to confront the Dark Man personally. Mother Birdie's crazed ramblings were enough to inspire new leader of the 13th Floor Ozma to confront Geppetto's popularity with the animals of The Farm and refugees of Fabletown by pooling their magic together.

When Bigby Wolf was transformed into a glass statue by Prince Brandish and smashed into millions of pieces, Mother Birdie helped gather all of the shards of glass and piece him back together again, though this was futile as Bigby soon fell under the control of Leigh Douglas.

When a feral Bigby proved a threat to Fabletown and brought down all of the protective enchantments the 13th Floor had worked so hard to create, it was Mother Birdie who reminded the 13th Floor about the magic lying dormant in the Mundy World, much to Maddy's shock. This either means that Totenkinder's curse broke of its own accord or the Fairy Witch managed to break it herself. Either way, she regained her clarity.

Mother Cherish as leader of the 13th Floor 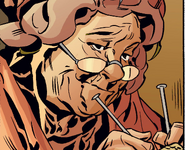 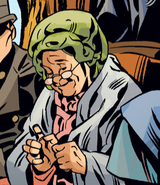 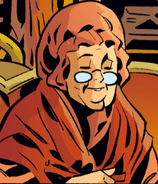 Add a photo to this gallery

Retrieved from "https://fables.fandom.com/wiki/Fairy_Witch?oldid=27378"
Community content is available under CC-BY-SA unless otherwise noted.