Cinderella was one of the Fables and the last of the three ex-wives of Prince Charming, along with Snow White and Briar Rose. She worked as a secret agent for Fabletown, formerly for Bigby Wolf and then for Beast, performing several tasks including interrogation, spying and assassination. At one time, she worked as a diplomat of Fabletown in the Cloud Kingdoms. She owned a shoe store, the Glass Slipper, as a cover for her spy work.

Cinderella was born to two wealthy unnamed parents. At some point in her youth, Cinderella's mother died and her father eventually remarried a woman who had two daughters of her own.[2] Cinderella was soon reduced to a life of servitude, forced by her stepmother and two stepsisters to perform countless menial chores day after day. Based on Cinderella's past remarks, her father died sometime after remarrying.[3]

One late afternoon, Prince Charming invited all the kingdom's young ladies to a royal promenade at his castle. Unable to go for one reason or another, Cinderella wailed in anguish until her magically endowed Fairy Godmother appeared and transformed the poor girl from a common house servant into a beautiful maiden.

Aided by enchantments, she attended the ball, but under the condition she return home before the stroke of midnight, as her party dress would revert back into her old rags and all her Fairy Godmother's other spells would be broken in a momentary instant. Despite this stipulation, Cinderella's evening turned out to be a splendid success: she entered the palace, wooed the spry Prince, but was abruptly forced to return to her home before she degenerated back into her rags. In her haste, Cinderella accidentally left behind a glass slipper on the steps of the palace.

Prince Charming, so captivated by the strange maiden, tried the glass slipper on each girl in the land until they were reunited again. Cinderella then married Prince Charming soon afterwards and became his third wife. The marriage was short-lived however, as her husband was unfaithful.

Before Cinderella could divorce her husband, however, the Adversary's armies laid siege to the country and the two were forced to stay together during the Exodus. As she still claimed to be his loving wife, Prince Charming was granted safe passage into the mundane world on one of the last boats voyaging to the realm.

Arriving in the mundane world sometime in the early nineteenth century, Cinderella promptly divorced Prince Charming and became apart of the Fabletown community, using the last of her fortune to open up a shoe store called the Glass Slipper.[4]

By 1812, it had only been a few short years since Cinderella and her then ex-husband arrived in the Mundy World, and Fabletown's sheriff, Bigby Wolf, tapped her to be his new spy, her role known only to him and a few select others. One of those was Frau Totenkinder, who provided magical support for her activities. While Cinderella initially had a good relationship with the witch, it soured as payments came due for her services. She'd been sent to France in 1812 to fetch a Fable who had run off the continent and gotten himself into a world of trouble. As she waited to rendezvous with the runaway Fable, she incapacitated one of Napoleon's Hussars.[1]

During the Civil War, Fabletown, although having hotly debated the merits of emaciation, inevitably decided to take the side of the North during the war between the states. In Maryland, during 1862, Cinderella tracked down Belle Boyd, a spy for the south who had a copy of the General Order 191 - with it General McCleellan could end Robert E. Lee's invasion of the North, once and for all. Cinderella couldn't stomach slavery; as an institution it reminded her of her former marriage. Appealing to the slave Eliza, the two incapacitated Boyd and retrieved the documents.[5]

In 1942, Bigby had gotten Cinderella to enter Paris only a few weeks after the states entered war. Along with buddy of Bigby's named Harp, they were far behind enemy lines. One thing led to another, and eventually the trio found themselves surrounded by Nazis.[6]

Cinderella spent centuries as a spy, with most of her missions focusing on the safety of Fabletown – such as seducing the discredited Ichabod Crane in Paris to get him to reveal that he was willing to turn traitor and provide valuable intelligence to the Adversary. However, Bigby also saw Fabletown’s dependence on the greater world meaning they needed to stay aware of it. As a consequence, Cinderella performed missions behind enemy lines in the second World War, and during the Cold War.

In recent times she also began investigating rumors of a Shadow Fabletown among eastern fables. She discovered a loose amalgamation of smaller communities, which were none too friendly to Fabletown. However, she was discovered snooping by their hired gun, Dorothy Gale, also known as the Silverslipper.

Cinderella had numerous missions to learn about the Shadow Fabletown over the years, frequently coming up against Dorothy when she did. Cinderella maintained a long vendetta with Dorothy Gale, both on a physical and ideological level; whereas Dorothy was a mercenary motivated by the thrill of murder and chaos, Cinderella was motivated by duty and pragmatism. Their enmity appeared to end in Switzerland in 1986, when Cinderella kicked Dorothy off a snowy mountain to her apparent death.

From Fabletown with Love

When Beast took over as sheriff of Fabletown, and preparations began for war, Cinderella’s secretive role become slightly more known. Prince Charming, now mayor, sent her as diplomatic envoy to the Cloud Kingdoms. There she forged an alliance between the giants and Fabletown – despite her dislike of politics.[8] This allowed Bigby to use them as an entry and exit point for a retaliatory mission to The Empire.[9]

She was also dispatched to South America when Fabletown received a message from Pinocchio. He had fled Geppetto with knowledge of gateways to the mundy world Fabletown was unfamiliar with. Dealing with some unscrupulous contact in the region, Empire thugs led by Inquisitor General Hansel, and an attack by Rodney and June, two ex-wooden soldiers, spies of the Adversary, Cinderella got Pinocchio back safely to Fabletown.

The war against the Adversary didn’t last long enough for Cinderella to have much to do. But as soon as it was over she was back in service investigating a black market trade between the mundy world and the Homelands Since magic being traded to mundys risked attention Fabletown didn’t want, Cinderella was tasked with stopping it.

The Arabian Fables had also heard of it, and Cindy reluctantly teamed up with Aladdin. They tracked the source back to the fable land of Ultima Thule, where Cinderella learned her fairy godmother was responsible.

The Fairy Godmother’s powers ran out at midnight, but Ultima Thule’s sun rose and set only once a year. Thus, she she’d taken power and traded magic for Mundy firearms that would enable her to retain power and enforce happiness on the land. Cinderella’s asset, the mouse Hickory, sped up local time so it reached midnight. That neutralized the fairy’s power before she was prepared. Cinderella easily dealt with her, handing her over to the locals for justice.

Following her reunion with her godmother, Mr. Kadabra of the Thirteenth Floor was found murdered with a sliver slipper brooch left nearby. Thus, Cinderella knew Dorothy Gale was still alive and after her. When she was approached by Shadow Fabletown member, Ivan Durak, claiming Dorothy had been hired to kill him, Cinderella was sure he was actually working for Dorothy. She let him accompany her anyway, fully intending to face Gale.

They followed a trail of Shadow Fabletown members, some killed by Gale’s agents. Inevitably Cinderella and Ivan were captured by Dorothy’s agents and taken to Oz in a airship. They fought free of their captors and landed the airship above the imperial road leading through the Deadly Desert – contact with whose sand was fatal.

Cinderella woke the next morning to find herself bound, and learned Ivan was long dead. Dorothy’s recovered magic slippers allowed her to impersonate him and capture Cinderella. Cinderella goaded Dorothy into releasing her for a rematch. While Dorothy took their enmity seriously, Cinderella was a professional and used this to escape with the airship. Dorothy’s silver slippers let her catch up, and they fought. After finally defeating Dorothy, Cinderella took her magical slippers as bounty, and presumably also was able to use them for assuming disguises.

Fairest in all the Land

Cinderella was forced to investigate a series of murders and deduced that Goldilocks was out to murder the beautiful women of Fabletown. Cinderella worked with Bo Peep and was able to kill Goldilocks, not without having to let other murders occur, though, and having to choose which half of the victims to bring back to life. Regardless of how sure she was of her reasons, this did not sit well with her.

Cinderella eventually meets her end after finally killing Frau Totenkinder, partly at the request of Snow White, who was sure of Totenkinder's decision to side with Rose Red in an upcoming war between the two sisters, and to even the score between them.

Cinderella has described herself as an excellent spy, a competent assassin, and a lousy diplomat. She has a mean streak and has a habit of making men angry.[8] To better maintain the secrecy of what she does, Cinderella puts on the facade of being an air-headed valley girl.

Cinderella is a beautiful young woman with fair skin, blue eyes and medium length light blonde hair. She is of average height, has a slim, yet due to her covert work, toned and athletic figure. She is often seen wearing clothes that employ a slipper-style motif on them. 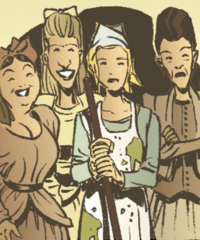 Her early life as a scullery maid 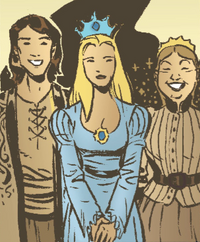 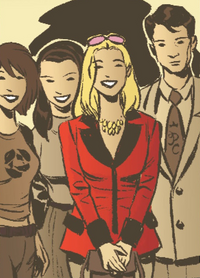 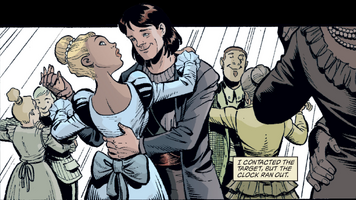 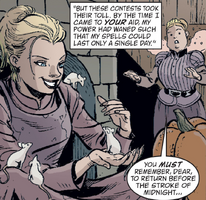 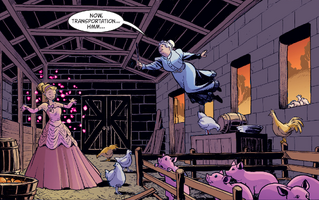 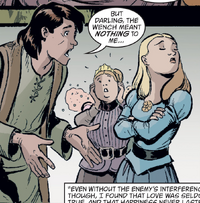 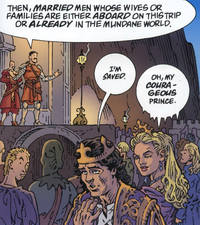 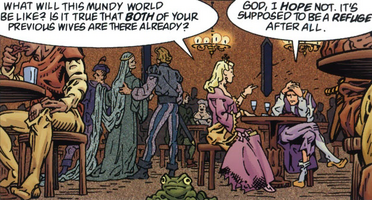 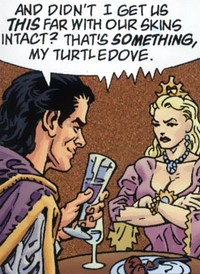 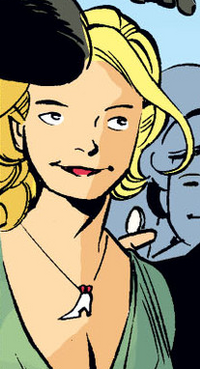 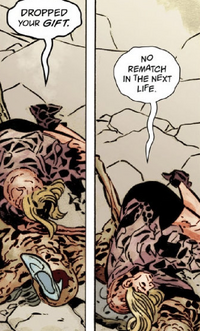 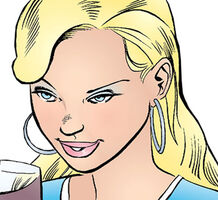 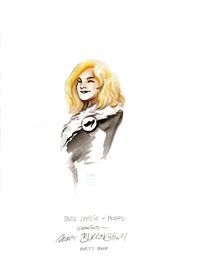 Retrieved from "https://fables.fandom.com/wiki/Cinderella?oldid=31032"
Community content is available under CC-BY-SA unless otherwise noted.