Bigby Wolf and the Blustery Day

Beauty and the Beast

Lord Beast is the husband of Beauty and the father of Bliss. A resident of Fabletown.

At the beginning of the series his curse is shown to be in a state of flux, making him human when his wife is happy with him and increasingly bestial as she becomes dissatisfied with him.

He later becomes the second sheriff of Fabletown after Bigby Wolf retires. In order to make him more effective in his new role Frau Totenkinder and the 13th Floor manipulate his curse so he can transform at will. He is considered a competent sheriff, but lacks his predecessor's strategic brilliance.

Very little is known about Beast, not even his real name. However it is known that at one point he came across a witch who disliked princes and confided in her his own fears that he would never find a woman who loved him for more than his wealth and lofty position. After hearing this, the malovlent witch then transformed him into a monsterous beast, but assured him that now whoever loved him would have to love him for himself and that this curse could be broken only with true love.

Beast did eventually fall madly in love with a beautiful young lady. Her love was enough to remove his curse and turn him human again, except at such times as she grew displeased with him, straining their love so that he reverted to his beastly appearance.

Sometime after they were married, Beast learned that his wife Beauty was not who or what she appeared to be. She was in fact a creature called Lamia, who, while fleeing from enemies, met and killed a girl and took her appearance and life. The Lamia kept the form too long, and came to believe she was "Beauty". But every so often Beauty reverts to her true-self — preceded by bouts of forgetfulness — and Beast took it upon himself to stop her from preying on brutal men. Much to his dismay, or perhaps reliefe, Beauty wakes after these periods with no memory of her actions as Lamia.

When the Exodus occured, Beast was forced to use all his wealth to book safe passage for him and Beauty into the mundane world. They eventually joined what would come to be known as Fabletown. Unfortunately, having lost or used most of their fortune in their fleeing of the Homelands, they were forced to take relatively low-paying jobs. While Beast maintained the Fabletown buildings, his wife worked as book clerk in the Fabletown bookshop.

Every few decades, Beauty became her old self, Lamia, again. When this happened, Beast would try to catch her in time and lock her away. Sometimes she escaped, and embarked on a killing rampage, targeting rapists and men who abused women (going after innocents was "not her style"). Beast then assumed the identities of famous heroes of detective fiction (such as Auguste Dupin, Sherlock Holmes, Hercule Poirot, Sam Spade and Philip Marlowe) and had to stop her before the mundy authorities could catch her. Beauty never remembered the incidents afterward and Beast never told her the truth.

In the 19th centuary, Beauty degenerated into Lamia and escaped Beast's clutches, going to Los Angeles. On November 14, 1946, Beast and Saint-George, who had been hunting Lamia for centuries, both discovered Lamia's latest victim and third kill out this time around: John Marais. After searching in vain for days, Beast finally for a lead which led him to the Hawk Lounge. Through the power of persuasion, he tracked Lamia down to a club called The Platinum, on Sunset Boulevard. Unfortunately for all parties invovled, Saint-George had beaten Beast there. Lamia set her sights on one of the club patrons named Joey. Saint-George departed to trail Joey, while Beast chased a gun-wielding Lamia throughout the club. Lamia escaped and met with Joey at midnight at the Chateau Rochecorban in the penthouse apartment of one of her victims. After killing Joey, Saint-George arrived and threatened Lamia with the Sword of Ascalon. However, Beast arrived and subdued Saint-George, rescuing Lamia. After killing Saint-George, who discovered Lamia's identity As Beauty, Beast took his recovering wife to the Art Buck Motor Lodge. Beast lied to an amnesiac Beauty, telling she that she had gone to Los Angeles, and only auditioned for a Howard Hawks film and gotten a callback. When Beast briefly left their motel room to get ice, Bigby Wolf arrived and threatened Beast to deal with the matter of Lamia permanently - even if it means killing Beast as well.[1]

With the election of Prince Charming to Mayor of Fabletown, Beast and Beauty's lives take a turn for the better. As neither Bigby Wolf or Snow White are willing to work alongside Charming, they resign, and the Prince offers Beauty and Beast the available jobs.

Beast, now sheriff, allies himself with Frau Totenkinder, the most powerful witch in Fabletown and finally had his curse fixed, allowing him to transform into his Beast form at will. Whether he's aware that it was Totenkinder who inflicted the curse on him in the first place is unknown; this occurred pre-amnesty, so he is legally unable to retaliate. While initially overwhelmed by the complexities of the job, he eventually grows into it the role.

Beauty takes Snow's position as deputy mayor, and also learns to cope with all of the responsibility. Early in her tenure, Prince Charming tries to seduce her, but she rebuffs him, threatening to send her husband after him if he tries again. It is notable that Beauty realizes, as a result of remarks made by Prince Charming during this seduction attempt, that her actions and words toward her husband are not generally as kind as she herself perceived; she subsequently resolves to be nicer to Beast.

After the arrival in Fabletown of the Imperial Emissary, Lord Hansel and the subsequent need to keep track of both him and his staff, Beast asks for, and is given, additional funding and manpower. This includes the zephyrs, provided by Bigby Wolf's father, the North Wind, which act as spies. During the war against the Empire, Beast remains in Fabletown, commanding the troops stationed there in case of a retaliatory assault by the Empire.

At somenpoint Beast and his wife question Frau Totenkinder about what it is she is always knitting. Totenkinder responds that it is a garment for their firstborn child. Though Beauty laughs, saying she's not even expecting, Frau answer "All things in time" and shows them the progress of her knitting: a pair of footed pajamas with a lion head sewn on the front, and four arms, two legs, and a place for a tail. Beast and Beauty are left flabbergasted by the implications

After having a brief argument with Beast about his behavior with Bigby, Beauty and her husband retire to a tent for make up sex. Afterwards, Beauty feels that there was something magical about this sex. In a subsequent, Beauty reveals she is pregnant. The child is born premature, but there are no apparent complications. The child, a little girl, is named Bliss, and seems normal. As Frau had predicted, though, there is a complication: When Bliss becomes angry, she transforms into a six limbed, tailed beast. Since the birth of little Bliss, her father is unable to transform into his beastly form. When Beast is examined by Ozma she is unable to detect any trace of his ancient curse. It is soon confirmed that Bliss has adopted his curse as her own.

Beast is considering making a new home for himself, his wife and their daughter in Flycatcher's kingdom in the Homelands, because Beauty will be safer there, as the "mundy" police keeps getting better and better at investigating and collecting evidence, and will catch Beauty sooner or later. The story's ending suggests that Beauty may be turning into Lamia again sometime in the near future. During Goldilocks killing spree, Lamia is gone for good: Beauty becomes the victim of the serial killer, and even though Beauty is brought back to life, Lamia is not.

Beast is ultimately killed by a feral, controlled resurrected Bigby Wolf. It remains to be seen if he will stay dead, given his story is very popular among the Mundies.

Despite his nickname, Beast is actually quite polite and civil. Unlike Bigby who is regarded by some Fables in fear and contempt, Beast is usually treated fairly and friendly by the other Fables. He isn't without his flaws. He can be naive and absent-minded: when he became sheriff, he misguidingly fired Flycatcher from his job as a janitor, believing that Bigby had treated him unfairly with all the community service, while in truth it was to keep Flycatcher's depression from paining him. Beast is quick to fix his mistakes however and "forces" Flycatcher to do community service again.

Inexperienced at first, Beast soon becomes quite competent as a Sheriff. He developed a liking for the espionage game and is able to keep order in Fabletown. He is also shown to be a capable leader, evident when he is shown to be involved with the war effort against the Empire. Like his predecessor, he is capable of using his beastly nature to his advantage. He intimidated Jack to cooperate. Yet, he is capable of showing mercy as shown when he exiled Jack from ever entering Fabletown.

Despite sometimes bickering and fighting, Beast is quite devoted to Beauty. He wants to make sure that she has a happy and secured life.

A tall, muscular, handsome fellow, Beast had brown eyes and light brown hair in his human form. As a beast, he was a large, hairy, horned creature with long canine teeth and sharp claws. 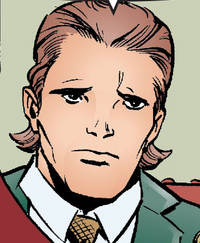 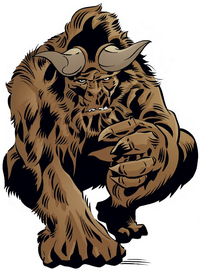 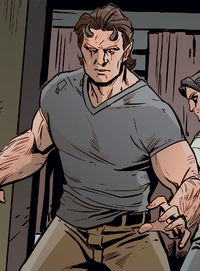 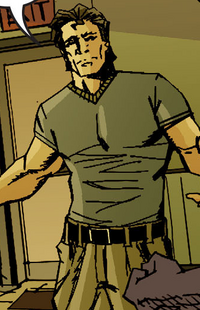 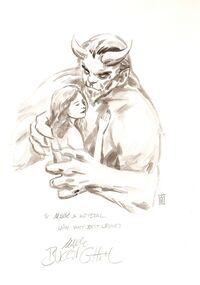 Retrieved from "https://fables.fandom.com/wiki/Beast_(Comic_Series)?oldid=30098"
Community content is available under CC-BY-SA unless otherwise noted.