Alice is a character who appeared in the Jack of Fables series. She was one of the Fables trapped in the Golden Boughs Retirement Village, where she had to fend off the advances of the amorous Wicked John. Alice was not seen among the Fables who left the Golden Boughs together after its destruction, and she was not present during the series' finale, indicating that she may be one of the few who survived the series. In the series' final story arc, the Page Sisters come across several books of the original Fable stories (from before they were revised by Mr. Revise), one of which is called "Alice's Adventures Beyond the Grave" (this may or may not indicate that she might be able to return to the living, even though she may or may not have been killed like almost every one in the "Jack of Fables" series).

Alice spent much of her time inside the Golden Boughs fending off the advances of Wicked John, a man she openly despised.

She managed to escape with John Henry and Pecos Bill during the big breakout, and the group briefly accompanied with Jack Horner, who told them the story behind his identity as Jack Frost. Jack made a joking pass on her, but Alice rejected him.[1]

Alice was last seen in the Golden Boughs during Bookburner's attack, where Mr. Revise gives her a copy of her original story, an act that is supposed to grant powers back to the character that had been stripped away. However, whatever abilities Alice had returned to her were never shown.

In the Jack of Fables series, Alice is wearing her classic knee-length dress with a white pinafore, but the dress is red rather than blue. Like in the drawings of John TenniTBAel, her hair is blond. 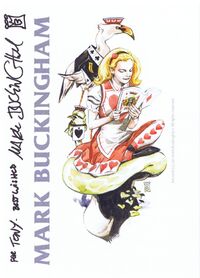 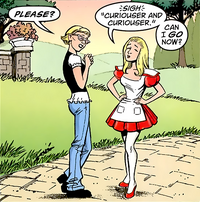